The countdown has begun: This is the month that we hope to publish the first edition of the Dictionary online. So, what will be in it? At the very least the following:

Despite the holiday season (or because of it? Family gatherings are the perfect time to do data-collection!), significant progress was again made in the month of December. 111 new entries were finalized, an increase of 21% over last month; and 2166 new citations reviewed and confirmed, an increase of 26% over last month (compared to 15% and 16% increases from November to December — not bad!). The average number of citations per entry is thus holding steady, at roughly 16 per entry. 5647 of the 10288 citations are in Latin, that is, around 54.8% (again slightly more than last month: This is attributable to the incredible wealth of early chartularia available on googlebooks. They’re just too seductive). 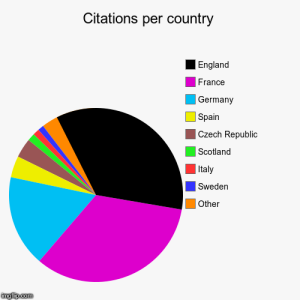 Italy jumps ahead of Sweden (due in part to a Perugian tax roll from 1285 that I’ve been working on), and the gap between England and France has closed substantially; they now differ by only ~200 citations.