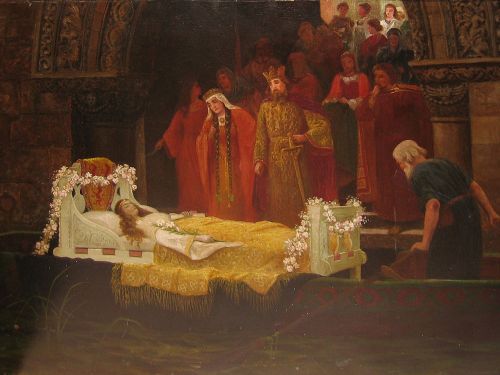 By Unknown – From The Lady of Shalott by Alfred Lord Tennyson. Painting known to be in family since at least 1887., Public Domain, https://commons.wikimedia.org/w/index.php?curid=14728406

Elaine is a form of Ellen, a name which was rare in France before the advent of the Arthurian tales, and was never common even after. The spelling Elaine is not a typical development from Latin Elena; instead, it was influenced by Welsh forms of the name. A 12th century legend identified Saint Helena, the mother of Emperor Constantine, as a daughter of “King Coel of Colchester”, sometimes identified with Coel Hen of Welsh legend. Despite the lack of factual basis for any of these legends, the name was popular in Wales.

French forms of the name include, variously, Helaine, Elayne, and Helayne. These -ai- or -ay- spellings are specifically associated with the Arthurian character, as opposed to Latin (H)elena or vernacular English forms such as El(l)en, the use of which probably is due more to Saint Helena than to the Arthurian characters. If we exclude the ‘standard’ spellings and focus on spellings with -a-, we find that, for whatever reason, Elaine’s name was not taken up with the same popularity as some of the other Arthurian names. In particular outside of France, the only -ai- or -ay- spelling that we have is Elayn, which is found in Latin contexts in Suffolk in 1381.