Every Monday we will post an entry that hasn’t yet been published with a view towards harnessing the collective onomastic power of the internet. If you have any thoughts about the name’s origin, other variants it might be related to, other examples of its use, etc., please share them in the comments! If you wish to browse other Mystery Monday names, there is an index.

Today we’re giving you not one, not two, but three mystery names! Why three? Because there might be a chance that they are related to each other. All are masculine names found Switzerland in the 14th-15th C; one is recorded in Old French, one in Latin, one in Middle French; all start with Cuen-.

Of the three, Cuenod is the easiest one to analyse: The -od suffix is a common Swiss diminutive suffix (cf. Perrod, Johannod, and others). If we take -in and -zy as diminutive suffixes (plausible in the case of -in, as it shows up in French; -zy is otherwise unfamiliar to us), then the root is Cuen- — possibly from Cuno or Conrad?

What do you think? Are we barking up the right tree? Have you any other examples of these names, or of names that might be related? Have you ever seen -zy as a diminutive suffix before, in Switzerland or elsewhere? Please share in the comments!

We’re pleased to announce the publication of edition 2016 no. 3 of the Dictionary of Medieval Names from European Sources, after a slight delay caused by needing to switch servers as we used all 1.2m inodes on our previous virtual machine. (If you notice any issues with the new website, please let us know.)

With this edition we have greatly expanded our coverage of Wales, Hungary, and the Czech Republic, adding many new sources and many new names for each of these countries. We have also added our first citations from Romania (an example of Charles) and Slovenia (examples of Berthold, Conrad, Reynard, Rudolf, and William).

In our previous post, we surveyed the percentage of diminutive and hypocoristic forms in the Dictionary’s dataset sorted according to modern countries, and one stand-out surprise was Estonia: Over 40% of our citations are nicknames of some form! Why is it that diminutives and hypocoristics were so popular in medieval Estonia?

Well, we aren’t exactly in a position to answer the why, but we can look at the what — what are the types of nickname patterns that we see, do they differ between men and women, can we say anything interesting about these patterns vs. those in nearby countries? That’s what we will explore in this post.

First, the feminine names: Only two of the nicknames belong to women, and both come from a Middle Low German contexts. The first is, in the vocabulary we introduced, a hypocoristic, formed by taking a name and truncating it to make a pet form. The example is Barbar, from Barbara. This same diminutive also shows up in Latvia, again in MLG contexts. The second is a diminutive, formed by adding the Low German diminutive suffix -ke, to the root name Anne, to result in the form Anneke. As with Barbar, Anneke also shows up in Latvia at roughly the same time.

This leaves over 600 diminutive forms left, of which nearly 10% — 53 — are Hans, a German hypocoristic of Johannes, one of the standard Latin forms of John, and if we add variants such as Hannes, Han, Hanß, etc., the number rises significantly. From about the middle of the 12th C on, John quickly became far and away the most popular man’s name throughout Europe. In German dialects, Hans, Hanns, Hannes, etc., were often as much more popular than Johannes or Johan than these names were than the next most popular.

So, one answer to the ‘why’ is: Because Low German was a standard documentary language in late medieval Estonia, and the most popular masculine name in late medieval Low German contexts was a diminutive, so that is why there are so many diminutives in medieval Estonia. (This, however, doesn’t address the other why question, which is why the nickname forms were more common than full forms!)

Hans makes up just under 10% of the masculine nicknames; a large percentage of the remainder are covered by just a handful of other names: Cord, Kord, Kort, a Low German hypocoristic of Conrad; Hintze, Hennyng, Hennynck, Heine, from Henry; Cleys, Clauwes, Claues, Claes, Cleys, Clawes, and numerous other hypocoristics of Nicholas; Ludike and Ludeke, from Louis; and Wynyke, a diminutive of any of various names beginning with wini ‘friend’. Other less common names also give rise to hypocoristics, such as Bastian, from Sebastian; Brosius, from Ambrose; and Aßmuß from Erasmus.

So much for the ordinary, every day nicknames, your Estonian Tom, Dick, and Harry, if you will. Let’s explore some of the unusual ones!

One thing of note is that many of these unusual hypocoristics derive from Biblical names.

This will not be the last time we see Theodoric when exploring this month’s topic!

In today’s post, we take a look at an area which has an amazing diversity of diminutive suffixes used in women’s names: medieval Germanic dialects (including Dutch ones from the Low Countries, because of their close kinship with Low German suffixes).

In terms of the vocabulary that we introduced in our previous post, German feminine nicknames were, for the most part, formed by adding such diminutive suffixes, rather than creating a hypocoristic form by truncating it (there are a few exceptions, such as Els, from Elizabeth, and Greta from Margaret.) These diminutive suffixes varied by dialect and by region, making it possible to identify, sometimes with a high level precision, where a name comes from on the basis of the type of suffix that it uses. So let’s start by taking a look at the distribution of the various dialects, and their divisions into Low German, Middle (Central) German, and High (Upper) German: 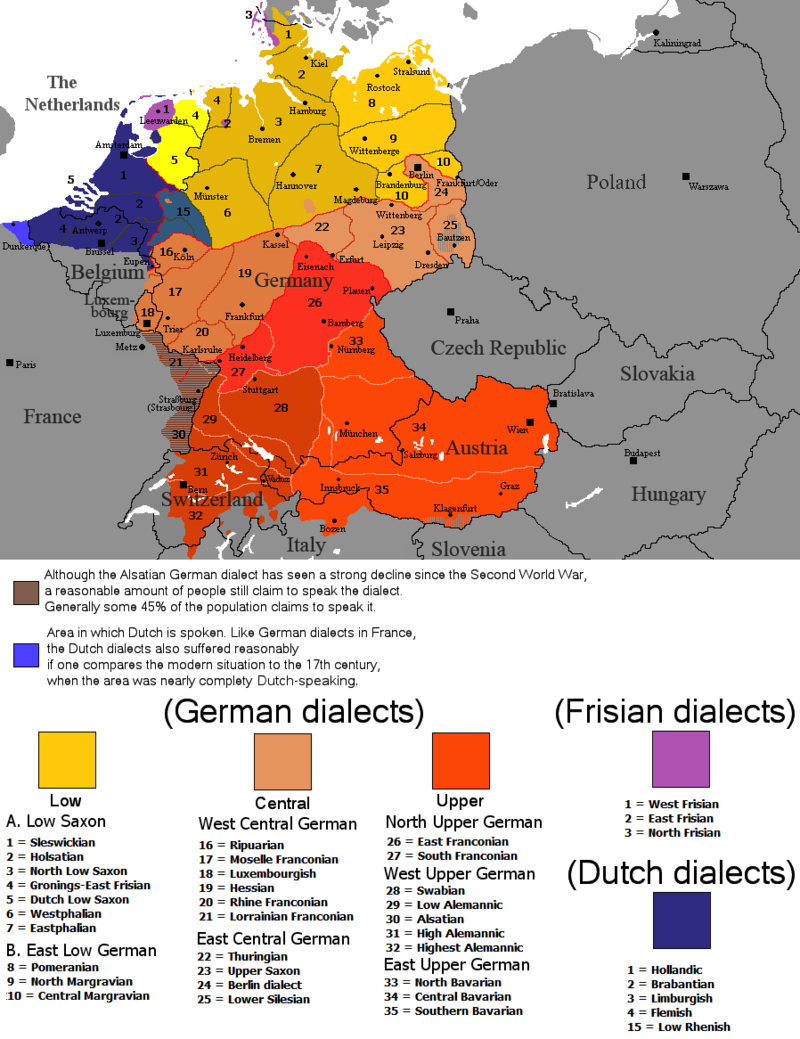 Starting in the south, High German dialects are typified by diminutives formed from -lin, including variants such as Swiss -li and Bavarian -el or -l. Examples of names formed with this diminutive suffix include Aͤnnlin, Aͤnlin, Aͤndlin, and Bridlin, Elsslin, and Bettlin, diminutives of Anne, Brid (Bridget), and Elizabeth (respectively) found in Rottweil, Baden-Württemberg, in 1441. [1] From the same source, we also have Keterlin, Kaͤtherlin, Kaͤterlin, diminutives of Katherine. These particular examples, from Rottweil, are likely examples of -lin added to a hypocoristic of Katherine, but other examples, from further south and east, may involve the Bavarian or Austrian diminutive -erl plus -lin.

-lin and -lyn are typical of Middle High German; it wasn’t until the shift into Early New High German that the spelling -lein starts to appear, such as Marlein (from Mary), Grethlein (from Margaret), Ketherlein (from Katherine), and Elßlein (from Elizabeth), all found in Kulmbach in 1495. [3]

People are often surprised to find nicknames in medieval records, since there can be a misconception that the only things that made it into medieval documents were the formal forms of names. Certainly it is the case that there were probably many more nicknames in use than the documentary evidence displays. The examples we have in written records were almost certainly predated by spoken examples, perhaps by centuries. But nicknames were not wholly excluded from formal documents: If this was the form of the name that the person was known by, this would’ve been the form used to refer to him in a record. As it turns out, the suffix -lin or -lyn are relatively old: German masculine examples can be found in Latinized contexts from the 13th C, including Choncelinus 1280 and Cunzelin 1294 (from Conrad), Reinboldelinus 1286 (from Reinbald), and Volfelinus c. 1236 (from Wolf). [2] But we’ll say more about masculine nicknames in another post! Another diminutive suffix whose use can be dated to at least the 13th C is -i, in the feminine names Beli 1267 and Jutzci 1295. [2]

In Low German, -ke(n) and its derivative are typical, found also in the Low Countries, and connected to Slavic -ka. (Diminutives of -ke also stretch further north, being found in Scandinavia.) While we have more examples of this suffix used with men’s names than women’s names, this is primarily an artifact of our data (containing more men’s names than women’s), rather than reflecting anything about the reality of the use of the suffix by women. Examples of this from across the Low German-speaking spectrum include An(n)eke (from Anne), found in Estonia and Latvia, Heilka, a diminutive of some name beginning with Old High German heil, hele ‘whole’ found in the mid 12th C, and Kattryneke, also found in Latvia. In the Low Countries, we can see examples such as Saerken (from Sara), Aelken (from Alice), Neelken (from Cornelia) [4], Claerken (from Clara), Grietken (from Margaret), Mariken (from Mary), Jacomynken (a double diminutive from Jacomine, a variant of Jacoba via the form Jacoma) [5] as well as Tanneken (from Anne), a variant which we just found an example of amongst the Dutch Protestant community in London in the 16th C.

In between these, -chen is characteristic of Middle German dialects, and it is a cousin of another Dutch diminutive, -ge(n). Most of our examples of this, so far, come from the Low Countries, with names like Claertgen (from Clara), Aeltgen (from Alice), Grietgen (from Margaret), Ariaentgen and Adriaentgen (from Adriana), and Maritgen, Marijtgen, and Marrijtgen from (from Mary) [6].