One thing that’s really fun about baptismal registers is seeing the incidence of twins being baptised, and what their names are. (A friend once did a study of a number of Welsh registers, and found that male twins were disproportionately baptised Thomas, which is an interesting comment on the transparency of the meaning to ordinary people at that time.) Because readers of this blog are likely to also be iterested in what twinsets are being named, we thought we’d do a short post on the names of twins found in the Stratford-upon-Avon, Warwickshire, parish register.

Announcement: Publication of Edition 2018, no. 1

We’re pleased to announce the publication of our first edition of 2018, now available (well, available since last night, but we’ve been traveling since then!) at www.dmnes.org. This edition has 21 new masculine names and 14 new feminine names (the full list of new entries in this edition is below), as well as many revised and updated entries – a total of 2267 entries with 56889 citations between them.

We haven’t pushed the temporal boundaries at all – no new citations earlier than our current earliest citation – but we’ve pushed the geographical ones: This edition is the first one to have any examples of European names from North Africa! (We talked about them in a post here). We’ve also increased our representation of names from Switzerland, with a selection of 15th century charters in Latin, French, and German, showing the same count of Gruyère being recorded variously as Franciscus, Francey, and Frantz. The French form is particularly interesting, because it is not a typical French spelling (that would be Francois); it clearly is showing the influence of the Swiss German diminutive construction in -i.

Thanks to the dedication of our Hungarian expert, we’ve added many more citations from Hungary, including many interesting diminutive forms, while another of our editorial team has been working through the registers of the Walloon Church at Canterbury, providing another dimension to the multiculuturalism of 16th century England.

So here are the new names in this edition! Have a fun browsing them, and the rest of the names, here. Let us know in the comments which of the new names is your favorite!

How medieval is “Your Medieval Name”?

There’s a meme (due to www.abbeytournament.com) that’s been circulating around Facebook sporadically recently, allowing people to generate their “medieval name” according to their birthday. You’ve probably seen it: 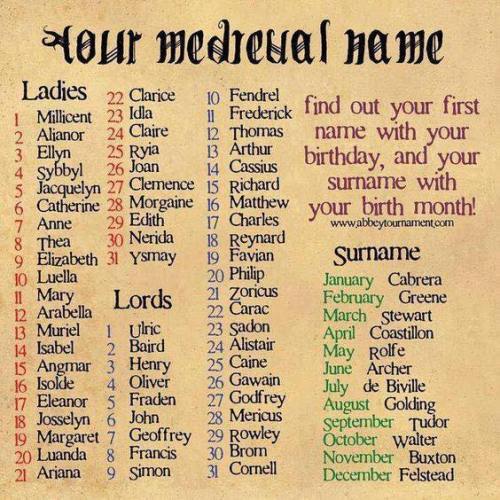 The first time it came up in a group that a couple DMNES staff are members of — a group not devoted to either the Middle Ages or to names — one editorial assistant put out a cry for “HALP”, and another swooped in with documentation. Now every time that meme comes around, we’re reminded of that thread, and finally decided to make a blog post out of it!

So, how medieval is “Your Medieval Name”? Actually, pretty medieval!

The feminine names are almost all good solid choices for late medieval England or France:

The masculine names don’t fare quite so well.

All the surnames are fine for 14th-16th C English, except these:

Father’s Day, or reflections on “ethnic” given names

Onomastic purists often shake their weary heads at the modern trend of taking place names as given names, scoffing at names such as Brittany, Dakota, Paris, Savannah, or London. “Naming a child after a place, those aren’t real names,” they mutter to themselves (forgetting, of course, that many surnames transferred to given names such as Courtney, Lindsay, Lesley, etc., were themselves originally place names). But is such a tradition all the strange or objectionable? In today’s post, we’re going to look at a very similar tradition that can be found throughout Western Europe: names deriving from words of ethnic or geographical origin. Some of these names are still in use today, some of them so common that they are no longer immediately connected with their origin.

This is by no means an exhaustive survey of all possibilities, much less of all the names the DMNES currently has (or will shortly have), but it shows a wide variety of ethnic and geographical references which have made their way into the given name pool. Geography has proved a fruitful source for given names for centuries, making the modern pattern of names taken from cities, states, and regions thoroughly in keeping with historical naming practices.

And what do these reflections have to do with Father’s Day? The Editor-in-Chief’s father’s name is Scott, and it was finding an instance of Scot in early 12th C Scotland this morning that sparked the reflections that led to this post.