In dictionary entries, we sort our citations by modern day country borders (because trying to ascertain which country certain towns were in at which period is quite a bit of work — especially when ‘country’ isn’t a viable geographic category for much of the Middle Ages!). One particularly interesting aspect of the multi-cultural/cross-geographic data that we have is that it allows us to trace certain patterns or trends across these boundaries, and one such pattern is the prolificness (or not) of diminutives. We touched on this in the previous post when we briefly commented on the percentage of names that are diminutives in any given era. In this post, we thought we’d explore this further, with some stats and some bar graphs; it’s been too long since we’ve had a nice graph!

Table of diminutive numbers and percentages

In some contexts, it is clear that we don’t have enough data to draw any sort of robust conclusions — Austria, Iceland, Malta, Norway, the Ukraine. But omitting these from discussion (and also omitting England, second from the bottom, and France, no. 8, since their much larger numbers make the graph inelegant), we are left with an interesting picture of the relative percentages of nicknames and diminutives across different geographical areas: 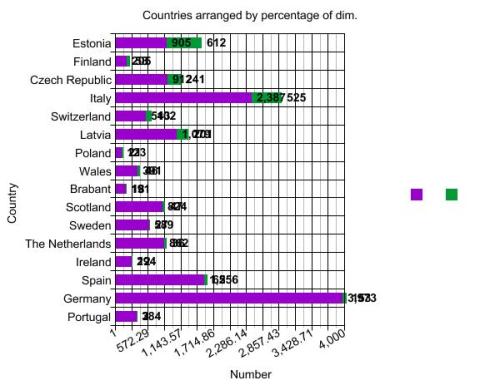 3 responses to “You want nicknames? We got nicknames!”